Gheorghe Asachi Technical University of Iasi is among the oldest and well known institutions from Romania, having an important tradition in engineering, scientific and cultural education, with a distinguishable presence on the international level. The university trains engineers with high qualifications, able to respond quickly and efficiently to the requirements of innovation, research and economic development.

In 1562, Moldavia has become famous for the first attempts to lay the foundation of what later on had become higher education, all thanks to the setting up of the Latin School at Cotnari, near Iasi. Still, it was not until 1813 that the scholar Gheorghe Asachi founded the first school of land surveyors and civil engineers with instruction in the Romanian language. This school can be considered the core of the technical higher education in Moldova. Later on, the school is developed within the Michaellian Academy (1835), and afterword’s within the University of Iasi, established in 1860.

On the 7th of November 1912, after passing the regulations for the Faculty of Science, they set up the proper Polytechnic Institute, which aligned more technical specialties: the department of the electro-technical, applied chemical and agricultural sciences. This event represents what may be called the birth certificate for the The Polytechnic Institute of Iasi.

In March 1937, when the Parliament of Romania voted the Law of Education, the technical higher education is transferred to the new established Polytechnic School which was, at that time, one of the few higher education institution in Romania qualified to issue engineer’s degrees. The new institution took from the very beginning the name of Gheorghe Asachi, the founder of the Romanian technical education, while professor Cristea Otin was elected its first rector.

At the present, Romanian and international students have access to the top notch technical studies in Iasi, as our university is one of the best in the country and Eastern Europe. Great professors, relevant courses and new labs await them! 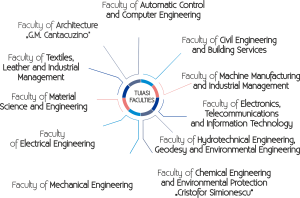 Gheorghe Asachi Technical University of Iaşi has the oldest tradition in engineering education in Romania. Our main goal of developing „technology for the people around us” has always been at the core of TUIASI’s research, teaching and technological transfer activities. This goal has made us continuously build and develop the university which now has more than 13.000 students, 23 research and excellence centres, laboratories (out of which 1 laboratory accredited by RENAR) focused on creating and transferring knowledge, especially in multi-disciplinary high-tech engineering areas.

Posted in news | Comments Off on Erasmus + COOPERATION PARTNERSHIPS (KEY ACTION 2) “European Digital Readiness Strategy for Clothing Studies”- EDRESS
We use cookies to ensure that we give you the best experience on our website. If you continue to use this site we will assume that you are happy with it.Ok